Proudly introducing the patron of ‘The Moat Players’, Emma Kershaw…

Here at the Moat Players we strive to provide a variety of genres of entertainment from pantomimes to musical to plays in order to keep our performances fresh and exciting for our audiences and to indulge the passions of all of our members so who better to be our patron but our incredibly talented, all-rounder Emma?! On this page, you can meet our patron, and find out a bit about her successful career. 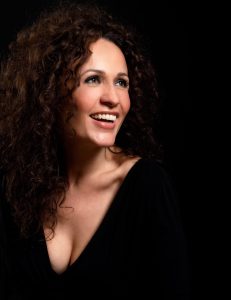 Emma is a versatile actress and concert artist who has featured with the Royal Philharmonic Orchestra, the BBC Concert Orchestra, the Bournemouth Symphony Orchestra, the RTE Concert Orchestra, the Halle Orchestra, the RAF Big Band and the AF Massed Bands.
Beginning with training on the violin and piano on a scholarship at the Royal College of Music Emma went on to Trinity College, London. While studying drama at the London Repertory Academy, she quickly established herself in both live and recorded performance. Her ability to combine her skills led her to being cast in many performances as an actor musician, playing lead roles in shows such as Moll Flanders, Cabaret and Into the Woods. Emma went on to play lead roles in West End shows and further afield in Europe.

As a session singer, Emma enjoys a wide range of work in the studio and in concert. She has contributed to numerous recordings, television shows, movie soundtracks and commercials and released her debut album ‘listen to my heart’ in 2011.

Emma Kershaw! Singer, musician and all-round performer – who or what inspired you to pursue this career?
I never wanted to admit that I dreamed of acting and singing but the people who have inspired me have  been Liza Minnelli, Julie Walters, Ella Fitzgerald and Stevie Wonder.

If you were not a performer, what do you think you would be doing?
I can’t imagine – it’s all I’ve ever wanted. I’m fascinated with people, so maybe counselling.

What, to date, had been the highlight of your career?
Can I have two? Singing for, and meeting the Queen at her 90th Birthday concerts at Windsor Castle, and also singing ABBA with the Royal Philharmonic Orchestra at the Albert Hall. I am due to repeat the experience next spring!

Performing as a musician must be very different to performing as a singer – do you have a preference?
I love both. Playing the violin or guitar is slightly less nerve wracking than singing, as nerves can affect your voice so much.

What would be the best piece of advice that you could give to an aspiring performer?
Get involved in everything going on around you. No experience is wasted – you can learn from everything.

What would be your dream gig?
I would love to revive songs of the Carpenters with new arrangements for an orchestra as I grew up with Karen Carpenters voice and she’s a huge influence on me.

If you could pick any line up/cast to perform alongside you at your dream gig, who would it be?
Julie Walters, Stevie Wonder and Quincy Jones. I’m wondering what kind of show THAT would be??!!

We all love a good story – what has been your most embarrassing moment on stage?
My first job in the Buddy Holly Story I had to sing the American National Anthem and I fell down the stairs leaving the stage in full spotlight.

What are your hopes for the future?
I want to stay healthy so I can still perform and I want to be around to see my kids grow up and have children.

Go to audition song – Child of Newgate. It’s a song from a musical ‘Moll Flanders’ by Stiles and Drew. I played Moll in an actor-musician show of it. The song’s based o an old English folk song, it’s incredibly powerful and I’m sure it got me cast in Les Miserables at the Palace theatre.

Sweet/savoury – Actually both. I just love food so much!

Cats/ Dogs – If I wasn’t allergic then cats.

Night in/ night out – IN. I have two kids and generally and too tired by the end of the day!

Dressed up/ PJs – PJs, but SUPER dressed up for concerts!

Home/away – Away. But definitely NOT camping.

To find out more about Emma, listen to her album or see videos of her performance visit www.emmakershaw.com